Monterey County’s finest chefs will showcase the versatility of the artichoke and share their own preparation techniques at our Artichoke Festival Chef Demos.

CHEFS! If you’d like to demonstrate your fabulous artichoke recipes at the Artichoke Festival Chef Demos,
please contact us toll free at 888-808-7707 ext 0, or send an email with subject “Chef Demos” here. 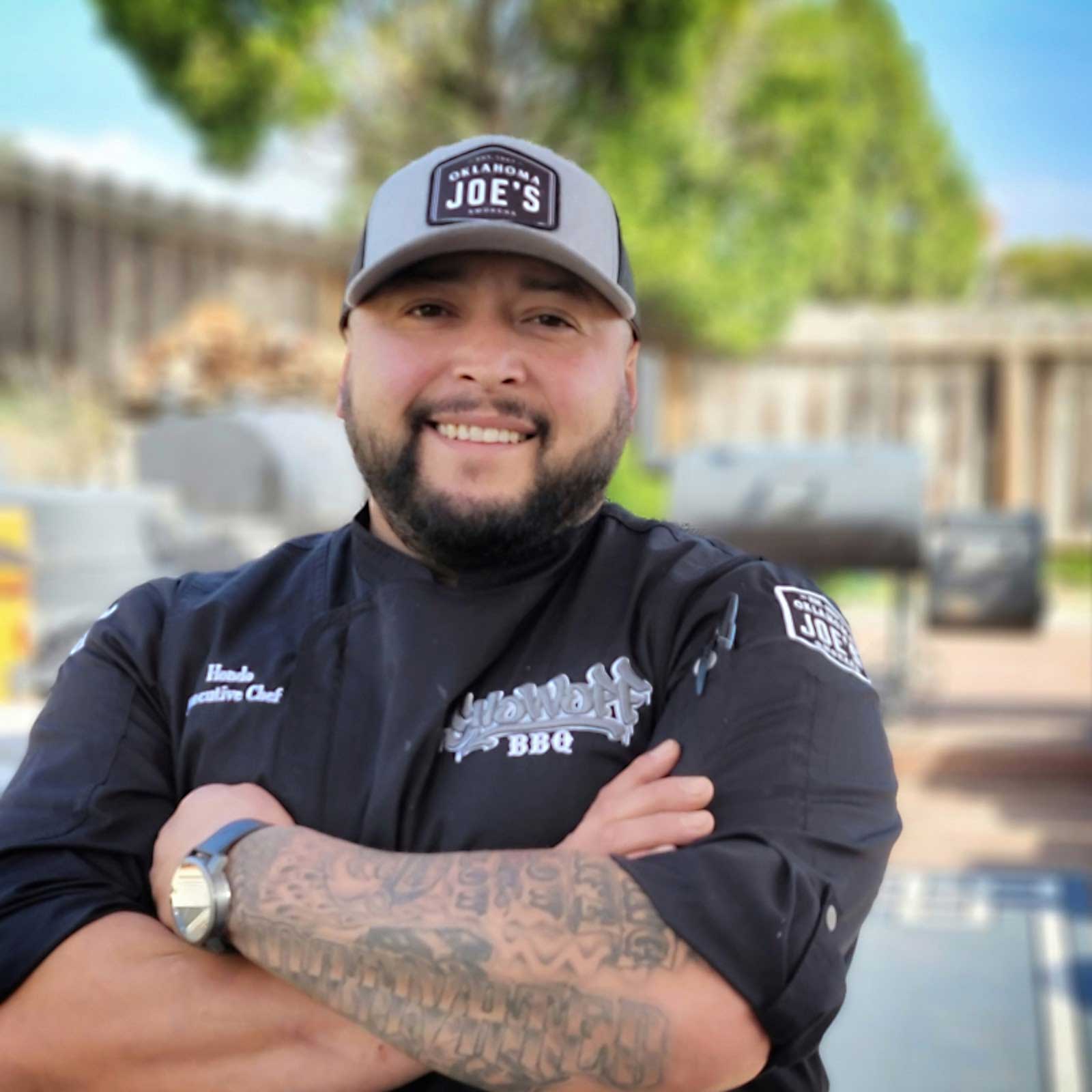 Chef Hondo Hernandez started as a Professional BBQ Competitor. Trained by Executive Chef Ernest Servantes in San Antonio, TX. Chef Hondo has won many awards for his BBQ most notably the first Gilroy Garlic Festival BBQ Contest in 2016, Ceres Smoke on the River Grand Champion, Ceres Battle of Champions Overall Champion and his crowning achievement winning back to back years at the NHS Las Vegas Steak Cookoff 2018 & 2019 earning spots at SCA World Championships in Fort Worth, TX as well as World Food Championships in Dallas, TX. Entering the restaurant industry as an Executive Chef in 2019, He introduced Championship quality BBQ to the Salinas Valley. Nominated two consecutive years for Best BBQ in Monterey County & Best Restaurant in Salinas, Chef Hondo has decided to take his talents on the road and walk away from the restaurant industry by opening his own food trailer with the help of his Wife and continued support of the community through pop ups and events. Coming to Monterey County in June of 2022 'Show-Off California Craft Barbecue' is a truly unique BBQ experience from hand crafted sides, succulent smoked meats and culinary inspired sandwiches and plates guaranteed to have you looking for their next pop up and join the following that has grown over the years. 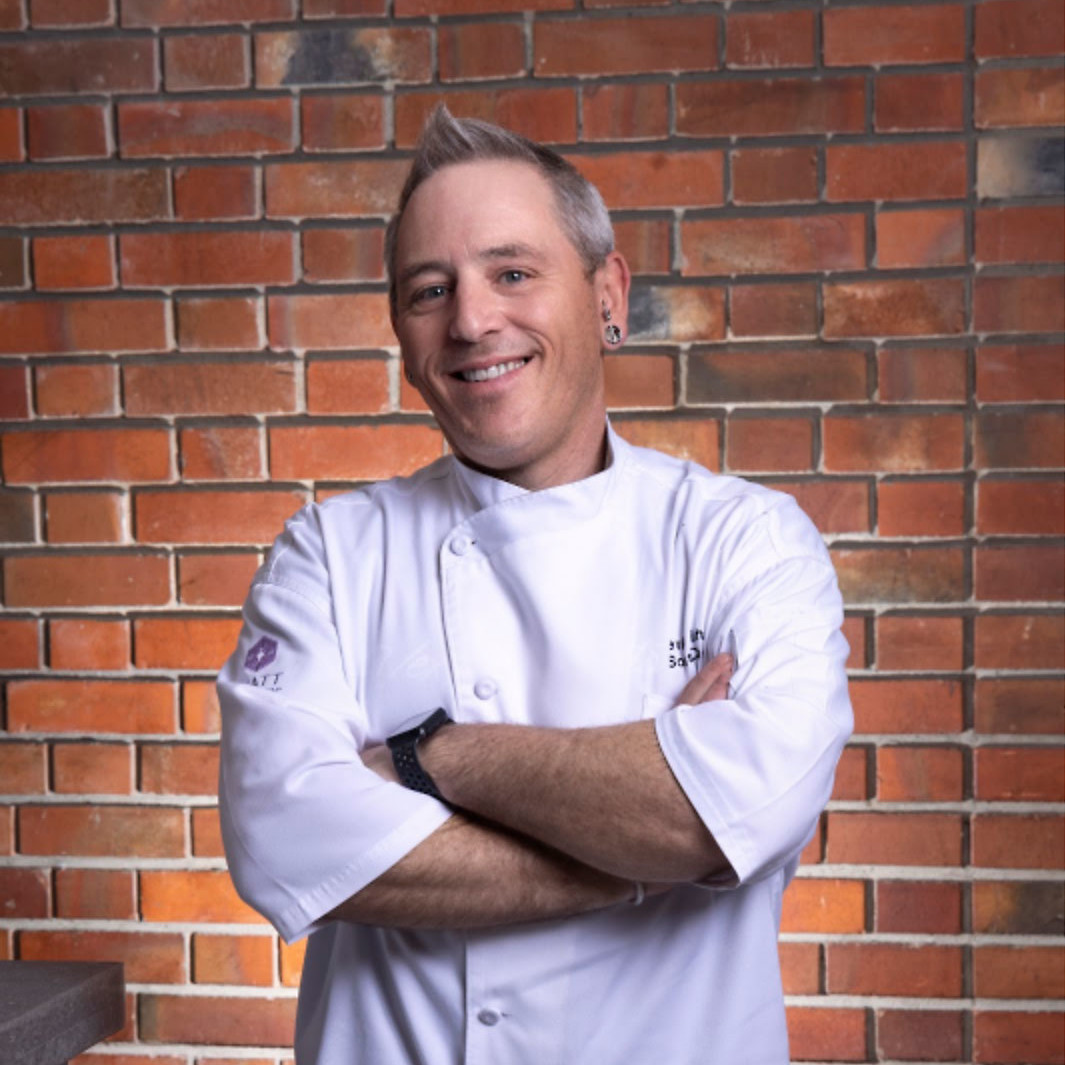 Kevin Fisher’s love for food began in his childhood home where his mother would make delicious meals. His father worked in the produce industry which made him a picky eater, but not in the traditional way. His desire for excellent quality in food and his natural love for cooking gave Kevin many opportunities in his career. Kevin began working at Hullabaloo with his brother in 2001, and from there his career took off. For the last 12 years Kevin has planted his roots at Hyatt Regency Monterey, where he found his passion with working in an expo kitchen. “I love that I have instant gratification of watching the plate land and seeing the reactions.” When Kevin isn’t preparing what he hopes to be a lasting impression with the restaurant’s guests, he loves all things car related, going camping, and enjoying the outdoors. 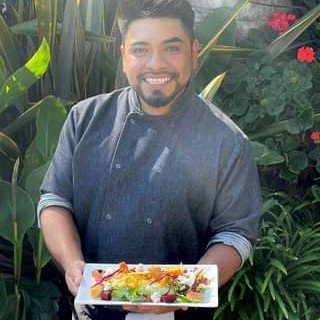 Ivan Guadarrama found his passion for the hospitality industry at an early age while helping with his family’s catering business. Working alongside his mother and sister, Ivan found working within a kitchen to be a very rewarding career path. In 2009, he decided to take his culinary skills to one of the most well-established restaurants in the Monterey Bay: Montrio. Shortly after he received the opportunity to expand his knowledge by joining the Tarpy’s team. “I am grateful to have had great mentors in the growth of my career at these restaurants who taught me that the love of cooking is loving oneself and loving what you do.” Ivan has proven his leadership skills within a kitchen and passion for the culinary arts as Executive Chef of Tarpy’s. 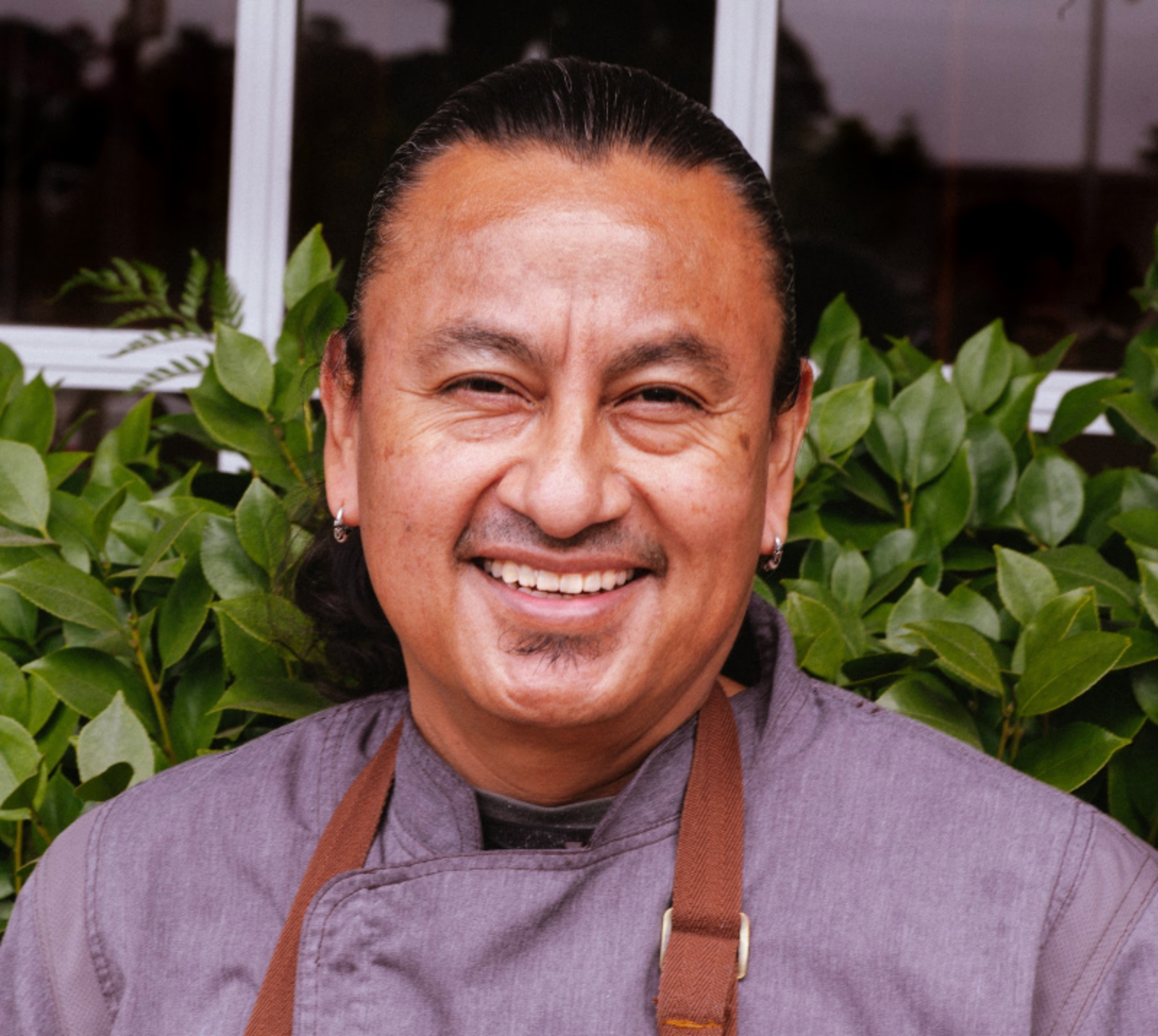 Luis Osorio began his culinary career in 1992 working for a local restaurant on the wharf in Monterey. Quickly finding his passion by 1998, he was running the kitchen at one of Monterey’s iconic restaurants, the Sardine Factory followed by tenure at Monterey Bay Country Club where he refined his kitchen leadership. In 2000 he moved to the OTONE Hospitality Group as Executive Chef. With OTONE, over the next 16 years, he was Executive Chef for Lallapalooza, and led opening the kitchens for their growth into Ellie’s, Lalla Grill, & Lalla Oceanside. In 2016, Chef Luis sought out an opportunity with Affina in Carmel to reinvent the restaurant and apply his talents to a new concept. He was eager for the challenge and was able to put his mark on the restaurant. In February 2021, five years later, following the impacts of COVID-19, Luis decided to take time off to spend time with his family and pursue private caterings while still volunteering at Shoreline Church. He is excited to take on the role of Executive Chef at Rio Grill, a part of the Coastal Roots Hospitality family. Chef Luis feels his culinary passions integrate well with the success of Chef Eduardo Coronel and looks forward to growing on the legacy of Rio Grill. His culinary philosophy has always been to cook simple homemade food, while sourcing local produce and fresh ingredients combined with spices from his hometown of Oaxaca, MX.

Judy was born and raised in the Salinas Valley. She is the current manager of the California Artichoke Advisory Board. She is an innovative home cook who loves to adapt recipes and make them her own. During her 25-year tenure as General Manager of the North County Recreation and Park District, she and her team catered several events for the district and other local non-profit groups. She is also a longtime supporter of the Artichoke Festival where she has served on the board and acted as a volunteer bringing many of her adapted recipes utilizing California artichokes for Festival goers to enjoy. Some of these include sweet and savory cheesecakes, lumpias, salsas, several varieties of stuffed artichokes, artichoke candy and her newest creation artichoke ice cream which you can find on the festival grounds this year!

Pat, former manager of the California Artichoke Advisory Board, knows Artichokes like no other. Hailing from the anthracite coal mines of Pennsylvania, Pat found her way to the artichoke fields of Castroville as a military spouse. Today, her annual ABC’s of Artichokes presentation at The Festival unveils the mystery and flavor of California’s official state vegetable.

You might be asking why they call themselves the Artichoke Queens. No, they did not enter a pageant and win a crown. If you’ve ever visited the CAAB website www.artichokes.org you know on the contact page there is a section “Ask the Artichoke Queen”. Well, the two people who have been answering these questions are Pat (for over 15 years) and most recently Judy. Hence their title “The Artichoke Queens”. 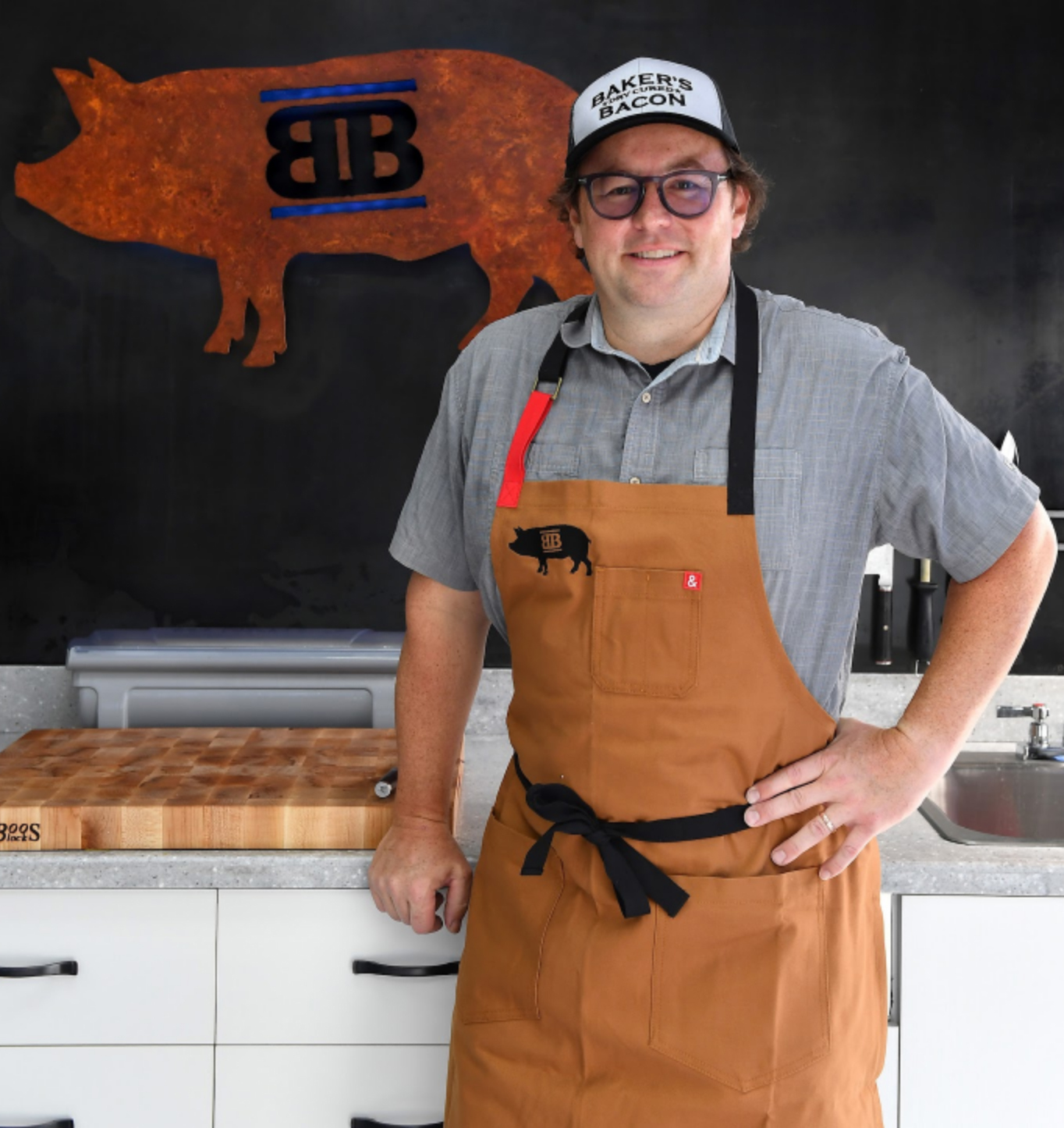 British-born Chef Tony Baker launched Baker’s Bacon in 2011 after a long and successful career both in England and California.

Tony’s passion for working with his hands, sourcing the best ingredients, and making food with care is ingrained in him. He remembers his days as a Boy Scout, which sparked his interest about pursuing a culinary career after he took a baking class.

Classically trained in the culinary arts at Brunel Technical College in Bristol, England, Tony began his career at multiple fine-dining, Michelin-starred restaurants around London including L’Ortolan, Lucknam Park Hotel and Hintlesham Hall. Hospitality skills clearly run in the family as his oldest daughter currently works at the Lucknam Park Hotel.

In 1994, he felt the pull to hop across the pond and began working for Montrio Bistro, part of the Downtown Dining Group, in Monterey, California. During his 25-year tenure there, Tony thrived working with the bounty of fresh California ingredients and local farmers. He also partnered with the Monterey Bay Aquarium’s Seafood Watch program and drove Montrio to become a certified Green Restaurant with the Green Restaurant Association, which evaluated all levels of sustainability for the business. While there, Montrio was consistently voted the “Best Restaurant in Monterey” by local readers’ polls.

Now, he employs that same artistry and technique to the small-batch, top-quality dry-cured and double-smoked bacon he makes using heritage breed pork for Baker’s Bacon. He began making bacon for the three restaurants in the Downtown Dining Group (Montrio, Tarpy’s and Rio Grill) and then expanded into wholesale distribution, selling his bacon to other chefs around the country.

“The market is saturated with mass-produced, watery bacon, and I wanted a high-end product that met my quality expectations,” he says. “Great bacon should have just the right balance of salt, sugar and smoke. Our bacon takes me back to my English roots.”

With multiple awards to his name, including the United Fresh Produce Excellence in Foodservice award in fine dining, the American Culinary Federation’s 2018 “Chef of the Year” and Edible Magazine’s “Chef of the Year,” Tony has also been invited as a guest chef for several events including Obsession at Northcote Manor and the prestigious Pebble Beach Food & Wine.

He lives in Salinas, California, with his wife and his favorite way to eat bacon at home is in a “Bacon Butty” – a traditional English sandwich of a soft flour roll, Kerrygold salted butter, back bacon and a squirt of HP sauce. 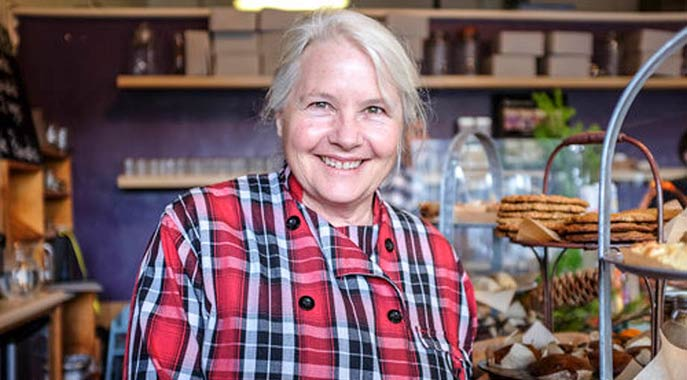 Pamela Burns, Proprietor of Wild Plum Bakery & Café in Monterey, believes in her community and is committed to providing fresh, organic and sustainable American bistro fare. Since 1999 she has run a truly green business and you can taste the difference—from organic & locally sourced produce, hormone-free Diestel turkeys roasted on site and grass-fed beef, to the house-baked bread and pastries. The café also features local organic coffee.

​They work with a number of farmers and food artists to truly bring you the very best of what is available. Pamela cites family operations like Blue Heron Farms, Fogline Farms, Baker’s Bacon and Pinnacle Farms. Stand-out elements include Wild Plum’s winter jam, a savory root vegetable jam used on all kinds of things, including the noteworthy mac and cheese; three house vinegars including a citrus champagne, a red wine and an apple cider vinegar; and house made ketchup and a remarkable mustard by Dutch Girl Farms.

Pamela had a vision. “My founding food philosophy was to make accessible food that people wanted to eat: delicious comfort food,” she says. “It’s not easy to find everything, and I spend a little more because I believe it’s that important, but I feel grateful that I can choose to do this.” 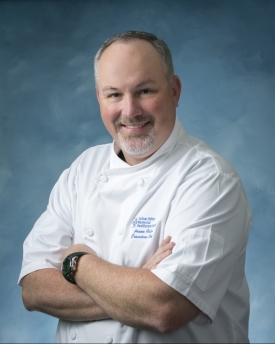 Chef Jason Giles is the Executive Chef and Director of Nutrition Services at Salinas Valley Memorial Healthcare System. Chef Jason has an extensive resume in the hospitality industry including some of the finest restaurants and resorts on the Monterey Peninsula. The American Culinary Federation Monterey Bay Chapter honored Chef Giles with the 2016 prestigious Chef of the Year award. He is now changing the face - and taste – of traditional hospital food. Chef Jason enjoys cooking with fresh, healthy ingredients and is pleased to share some of his heart healthy recipes with you.