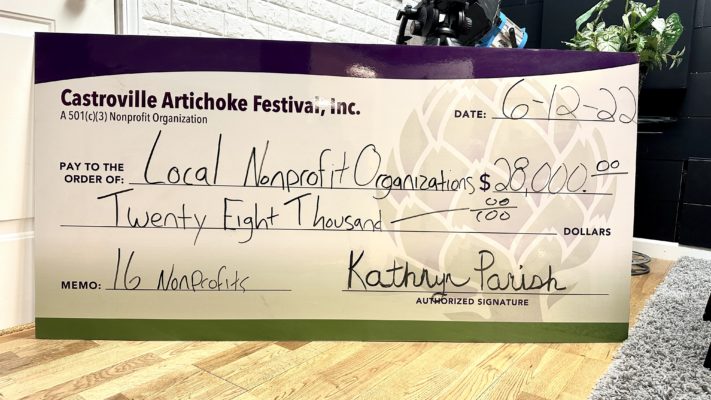 MONTEREY, Calif., (Jan. 20, 2023) — The 2022 Artichoke Festival, the 62nd annual edition of the event, was able to raise $28,000 for 16 Monterey County nonprofits, including a number of youth and student groups, civic clubs, libraries and academic organizations, and more.

Agricultural education and the future of the community were the central focus of the 2022 festival, with the theme, “The Heart of the Harvest.”

As the Artichoke Festival has grown in scope and footprint, so has its annual giving. The Festival Committee is proud to announce that in the past decade an accumulated total of more than $300,000 in cash and in-kind donations have been given in support of community non-profits and service groups.

The festival showcases the full range of tastes that the Monterey County farming community has to offer: artichoke cooking demonstrations by local celebrity chefs; a bountiful farmer’s market with freshly harvested produce from Monterey County and beyond; an artichoke agricultural education exhibit; live stage entertainment; family-friendly fun activities; wine tasting; and artichokes prepared in a variety of delicious ways, including the fan-favorite fried baby artichokes, plus artichokes steamed, grilled, fried and served in various forms, such as in burritos, sausage, soup, tacos, nachos, garlic fries, pasta and even ice cream.

More information about the festival is available at www.ArtichokeFestival.org.

About the Artichoke Festival

California’s artichoke history began in 1922 when the first artichoke shoots were planted in Castroville. Today, more than nine decades later, nearly 100 percent of America’s fresh artichoke supply is grown in California and nearly two-thirds is grown in the small town of Castroville.

The first Artichoke Festival was held in 1959 under the sponsorship of the Marinovich Marching Units, with the assistance of the Castroville Rod and Gun Club. In 1961 it was a joint venture of the Marinovich Marching Units and the Castroville Chamber of Commerce to produce a larger festival, and Sally DeSante was chosen as the first Artichoke Queen. 1963 began with the Festival’s sole sponsorship by the Castroville Chamber of Commerce under the direction of the Artichoke Festival Board with Bill Price, one of the originators of the festival idea.

The Artichoke Festival is produced by a 501(c)(3) nonprofit organization whose hearts and minds are focused on enriching the lives of the next generation, continuing a legacy to build a future in which our area’s youth will have the skills and knowledge they’ll need to grow and flourish as community-minded leaders.